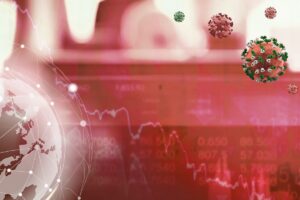 Several clients have recently asked my thoughts about COVID-19’s impact on our economy. When we will have an effective vaccination or when will the virus become dormant? Many others have been asking why the financial markets are doing so well lately given the high levels of unemployment and business downturn. When I received my Registered Investment Advisor license, they forgot to pack in a crystal ball . . . and I’m still waiting for it. Absent that, let’s look at recent events to see where we might be headed and if we can make sense of all that’s happening . . . “Imagine That™!“

The Economy Is Still In Recovery Mode

In stepping back from what is happening in the economy and looking at the major U.S. market averages, there is an incredible “disconnect.” My apologies in advance for getting a little “granular” . . . we need to “set the table” with a few statistics . . . but just a few!

U.S. Gross Domestic Product (GDP), which is the broadest measure of the value of goods and services in the economy, fell at an annual rate of -32.9% in the second quarter of 2020, the largest decline on record (U.S. Bureau of Economic Analysis data – quarterly data began in 1947). The prior record, a -10.0% annualized decline, occurred in 1958 and coincided with another pandemic: the Asian flu.

The contraction in the economy can be blamed on the incredibly swift decline in the economy which began in March and quickly accelerated in April. The lockdowns, which were designed to slow the spread of COVID-19 (or so they tell us), are the primary cause of the economic decline. The goal was to “flatten the curve” so that our healthcare system would not be overwhelmed with a wave of coronavirus patients accessing our hospitals and healthcare providers all at once. But, as Brit Hume, a 23-year veteran of ABC News who has covered politics for nearly five decades put it, “the nationwide coronavirus shutdowns may not have ‘flattened the curve,’ but they’ve ‘certainly flattened the economy.’” In April alone, employment fell by a record 20.8 million (St. Louis Federal Reserve). For perspective, 152 million individuals were employed in February.

The good news is we have experienced a great rebound. May and June saw a significant improvement from these depressed levels. The economy generated a record number of jobs in May and June, erasing one-third of March and April’s job losses (U.S. Bureau of Labor Statistics data). We also saw big gains in retail sales, following a record decline in April (U.S. Census), as businesses began to reopen, furloughed employees returned to work, and stimulus money ($1,200 checks and generous unemployment benefits) found its way into the economy.

The Financial Markets Are Back To Normal, At Least For Now

Yet the major market averages tell a different story. The S&P 500 Index, which is a broad measure of the U.S. financial market, closed at an all-time high on August 18th. It was the first time the index hit an all-time high since COVID-19 arrived in the United States. The tech-heavy NASDAQ Composite is also having an impressive year (up 19.6% year-to-date as of August 21st). Some of the larger technology stocks appear to be more insulated from the initial impact of the recession, and investors have taken notice.

The Federal Reserve’s massive response to the crisis, coupled with a strong response by the federal government, has also encouraged buying. In addition, investors may be looking beyond a dismal second quarter, both in terms of GDP and profits, and attempting to price in more favorable conditions later this year and into 2021.

The recession that began in February (per the National Bureau of Economic Research) appears to have ended in April, which would make it the shortest on record. However, it may be months before the NBER, which is the official arbiter of recessions and expansions, decisively calls the bottom.

Let’s not dismiss May and June’s upturn in the economy. It has been encouraging to see economic activity bounce higher and millions return to work. Still, the outlook remains unusually uncertain. As states around the country began to reopen, predictably, the number of COVID-19 cases has spiked. This has injected a new round of uncertainty into the outlook. To contain the virus, some states have slowed reopenings and others have implemented new restrictions.

If we look at what is called “high-frequency data,” such as daily air travel through Transportation Security Administration checkpoints, daily restaurant books via OpenTable, and daily requests for directions via Apple Maps, economic progress slowed or stalled in July. These metrics don’t correlate perfectly with the economy or the larger S&P 500 firms, but they approximate what is happening in the broader economy. Further, layoffs remain at historically high levels as measured by weekly jobless claims (Dept. of Labor). Although a record number of people are going back to work, layoffs and bankruptcy filings of businesses remain high.

The Coronavirus Aid, Relief, and Economic Security Act (CARES Act) was signed into law by President Donald Trump on March 27, 2020. The bill provided $2 trillion in relief to businesses, organizations and individuals and is the largest-ever economic stimulus package in U.S. history.

With some of the funding running out from the CARES Act, Congress could not reach an agreement on another stimulus bill. On August 8th, President Trump signed an executive order and three memoranda with the aim of providing financial assistance and relief to Americans amid the ongoing COVID-19 pandemic.

One of the memoranda concerned providing additional money to people receiving state unemployment benefits. The memorandum stated that the federal government will fund $300 of the amount until funds are exhausted, leaving states to pick up $100 of the benefit per individual. Forty-four billion dollars is allocated in federal funds, and once depleted, the memorandum indicates that states may have to fund the full amount. As you might guess, however, many states are short on funds since they are not receiving as much tax revenue as before the coronavirus pandemic. In addition, some states (like California) have deemed that illegal aliens are eligible for financial assistance . . . which has further emptied the State’s coffers.

The spread of COVID-19 is hampering the recovery and creating a new round of uncertainty. Will this be temporary? Will new cases begin to slow in September and October? Could we see a second wave in the fall and winter? These are all great questions with no clear answers.

Today, the path of the economy is linked to the virus. Hence the unusual degree of uncertainty. As Federal Reserve Chairman Jerome Powell said in late July, “The path forward for the economy is extraordinarily uncertain and will depend in large part on our success in keeping the virus in check.” Yet, there has been encouraging news regarding a vaccine. If developed and readily available, a vaccine could be just the right prescription that could greatly increase confidence to venture back into restaurants, movie theaters, sports arenas, and even airplanes.

Social distancing, face masks, and recommended safety protocols of the Centers for Disease Control and Prevention are a step in the right direction. However, a vaccine and/or an effective treatment are probably the best way to enhance mobility and help us move past this challenging chapter in our country’s and world’s history. The economy may not be the same when the pandemic is eventually in the rearview mirror, but we are a resilient people. We will persevere and we will adapt.

As a result of the COVID-19 situation, you may have concerns about your business, investments, insurance needs, retirement planning or legacy implications. If so, please contact us to schedule a complimentary review of your planning needs. Even in difficult times such as these, with proper planning it is still possible to have a high degree of confidence in your business direction, investments, retirement, and legacy . . .

Imagine That™! is a complimentary monthly newsletter provided by Wealth Legacy Group®, Inc. that addresses various topics of interest for high-net-worth and high-income business owners, professionals, executives and their families.
Sign Up To Receive Our Monthly Newsletters